In a 1986 letter, writer and Florida Historian Helen Muir politely accepted an offer to an exclusive women’s club on Miami Beach from Wolfsonian-FIU Founder Micky Wolfson, but in the next sentence requested helicopter service for old ladies from her home of Coconut Grove. This image of a mobilized ensemble of grandmothers flying over the city of Miami on its way to discuss the important issues facing South Florida could not be more apt to begin with upon diving into the Helen Muir Collection from the University of Miami Special Collections Library. It encapsulates Muir’s life with words, action, and a slyly entertaining joke.

Her sense of humor was even appreciated by the Pulitzer Prize winning poet and American legend Robert Frost in 1940. Frost, who wintered in Miami due to poor health, tells Muir that she “manage[s] to be amusing at my expense and at the same time amusing to me.” This impressive compliment was repaid by a twenty-year relationship between the two, and a book, entitled Frost in Florida (1995), about the poet’s life at his winter home. The book itself is a touching account of a man often misunderstood, and helps counteract the widely-held view of Frost as an scholars irascible and difficult personality.

Frost’s nicknamed his estate in Miami “Pencil Pines”, a double play on the writerly life and the sprawl of long thin South Florida Pine that dotted the landscape at the time. It was a serene and contemplative place where you could have once seen the poet and Helen Muir strolling the wooded grounds talking about life, family, and the world of letters. Another piece of ephemera in the collection is a contract from a roofing company for work to be done on the lands. William Muir, Helen’s husband and a prominent local lawyer, executed Frost’s South Florida Estate upon his death in 1963, a testament to how close the Muirs and Frosts relationship had become over the years. In addition to correspondence between Helen and his widow and children, there are countless other documents referring to sick trees at “Pencil Pines”. Signed in the bottom right corner by Frost, this document is not only a testament to the tedium of mid century South Florida land maintenance but also the minutiae of working through a collection of papers at a museum and finding connections. 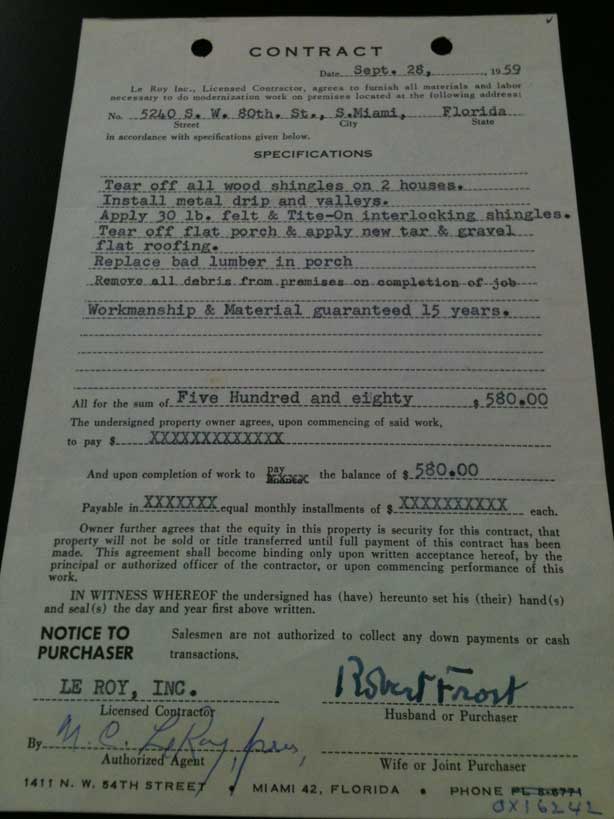 Like everyone who has made a mark on the city of Miami, Helen Muir was a pioneer.  Muir, who moved from New York in 1934, wasn’t born in South Florida, but she was a lifelong local resident who tirelessly worked at improving and defining the city. One enduring place she focused a great deal of this spirit on was in the future of the libraries of Miami. She served on the board of both Miami Dade County Public Library System and our own University of Miami Libraries. This association with the University of Miami is why she chose to donate her papers here upon her death in 2006. The collection contains both personal and professional letters, columns and drafts of them, a file on her relationship with Frost, and notes for books, such as the influential Miami U.S.A. (1953) which is an infinitely more readable and important contribution to understanding the tapestry of this great city than Joan Didion’s Miami (1987).

The crisis of libraries in the 1970s and 1980s was almost startlingly blind to the present day problems that libraries are facing now due to the rushing advent of digital information consumption.  However, the very real problems in that era were very similar: budget cutbacks, clunky and confused legislation, and stubbornness in the face of drastic change. In an impassioned speech made to the Coconut Grove Women’s Club in 1974 Muir spoke about her desire to start the Friends of the Miami-Dade Public Library, which is still in existence today.  Coming to a conclusion in which she pled with the members to pledge the one dollar dues, she said, “THE ONLY WAY TO MAINTAIN THE PAST IS TO MERGE IT IN A LIVING WAY WITH THE PRESENT” [emphasis in the original]. It is perhaps fanciful to wish for a public voice like Muir’s during the upheaval libraries are now facing. Muir passed away in 2006, and today’s readers can only hope that the enthusiasm she brought to forming literary communities and houses of books and knowledge in South Florida is still found somewhere amongst the literary milieu.

Muir began the Friends of the MDPL organization with her longtime friend and South Florida’s most important environmental advocate Marjory Stoneman Douglas, who was its first president. The two were fond of having sherry together and gossiping, but those moments were followed by serious talk of the future of libraries, and the role of women in South Florida. They were confidants, and often shared their work with one another. It is unthinkable that in that same helicopter flying over the city on its way to Miami Beach, another of the “old ladies from Coconut Grove” wouldn’t be the great Marjorie Stoneman Douglas.

Much like the relationship with Frost, Helen Muir’s friendship with Stoneman Douglas extended to her family as well. In the height of South Florida’s anxiety about the gangsterism of the 1930s, Stoneman Douglas co-authored a play with William Muir called Storm Warnings loosely based on the life of notable mobster Al Capone. Muir notes in Miami U.S.A. that some of Capone’s henchmen showed up at the theater, “add[ing] an extra tingle for the audience that night”, though no actual problems arose.

The Muir’s love for family was great, and the correspondence between son Toby and daughter Mary are also in the collection. One of the more intense moments of the family’s life happened in 1944, when Helen and William’s daughter Melissa was struck and killed by a careless driver. The inquest around this incident, which is found in the collection, centers on the now dated notion that the driver, a woman, hired presumably because of a shortage of male drivers during World War II, was unable to handle a large delivery truck. In 1950, Muir wrote an emotional and widely distributed account of the accident. The piece itself led to innovation leading automobile industry removing the vertical cross bar on the windshields of trucks, giving the driver a more expansive view. Muir herself felt proudly righteous knowing that her words had enacted real change and ultimately saved lives. Helen Muir understood that words could adapt real change in the community. She used them brilliantly as a regular newspaper columnist and Florida historian. The papers of this exceptional woman can be found in the University of Miami Special Collections Library.